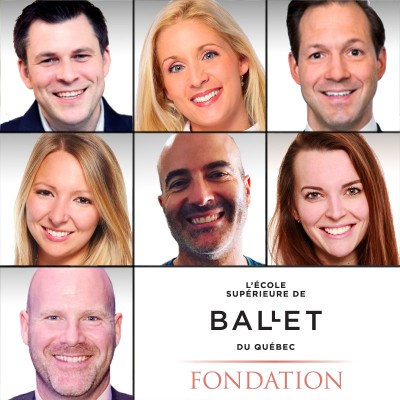 The Board of Directors of the Fondation de l'École supérieure de ballet du Québec is pleased to announce the appointment of seven new members for 2020-2021. Five of them have actively contributed to the development and success of the Jeune Scène d'affaires for several years. All are committed to sharing their strong expertise in communications, business development and financial management.

Navigating in the field of finance since 2008, Alexandre-Benoit Beauregard now works at Valeurs Mobilières Desjardins as an Investment Advisor - Wealth Manager. A loyal and active member of the Jeune Scène d’affaires since its inception, he stimulates the active involvement of other collaborators and ensures the achievement of financial objectives with the always impeccable execution of the benefit event Pointes & Nœuds papillon.

With proven expertise in project management, Dominique Bérubé has been Pre-Development Director at Devimco immobilier since 2019. He has also been in charge of large-scale projects such as the former Radio-Canada site and Silo 5. His commitment to L’École supérieure is reflected in his ongoing involvement with the Jeune Scène d'affaires, where his extensive knowledge contribute year after year to the achievement of the financial objectives of the Pointes & Nœuds papillon benefit event.

A seasoned communicator, Emilie Couturier has been ensuring Proaction International's strategic growth as an Advisor, Marketing and Communication Strategy since 2018. Her expertise in all things event-related did not go unnoticed when she was dynamically involved with the Jeune Scène d'affaires for two years. In addition to having contributed to the success of the Pointes & Nœuds papillon benefit event, her invaluable contribution to the development of an active community of philanthropists has also fostered a greater awareness toward the dance world.

Constantly seeking new professional challenges, Mathieu Guertin has forged his expertise over the years through exceptional positions. Now at Laurentian Bank Financial Group as Assistant Vice President – Process and Corporate Services, he masterfully manages budgets, employees and clients. In addition to his long-standing volunteer work with various organizations, he was actively involved in the creation and success of the Pointes & Nœuds papillon benefit event with the Jeune Scène d'affaires until 2018.

As Executive Vice President, Consulting & Global Integration at Ogilvy Canada, Caroline M. Gauthier has been transcending the agency's goals for over 10 years. Her many accomplishments have also extended to her volunteer involvement since 1997 with the Danville Chamber of Commerce, among others. Always striving to surpass herself, she has recently started a new project that already looks promising.

Newly appointed Strategic Talent Leader at WSP, Elisabeth Malo forged her career in the field of human resources mainly at Proaction International with 10 years of loyal service. In 2015, she began her first volunteer experiences. She joined the Jeune Scène d'affaires in 2017 and immediately put to good use her ability to bring others together and bring out the full potential of each team member.

On the job since September 2019 as Vice President, Marketing and Development at La Ruche, solution de financement, Nicolas Rubbo has an enviable track record in management and marketing strategy. A seasoned leader with appointments at the helm of several organizations in the last 10 years, he has also distinguished himself through his constant volunteer involvement with various players in the Montreal cultural field.

Discover all the members of our Board of Directors