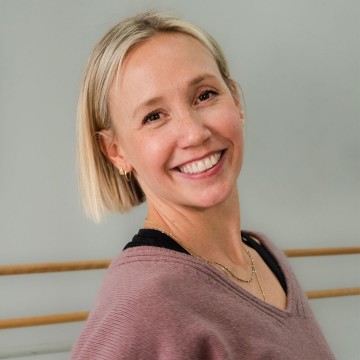 Born in Portland Oregon, Robin Mathes received a BFA at The Juilliard School in New York City in 2001. She also studied at The Harid Conservatory, Cleveland Ballet and Oregon Ballet Theatre.

Upon receiving her diploma, she has had a long career dancing with prestigious companies such as Ballet Tech in New York, Les Ballets Jazz de Montréal, and was a soloist for Les Grands Ballets Canadiens de Montréal for 10 years.

During her career she danced numerous principle roles and worked with some of the most renowned choreographers in the dancing community, such as Ohad Naharin, Mats Ek, Nacho Duato, Mauro Bigonzetti, Jiri Kylian, Crystal Pite, Shen Wei, Stijin Celis, Didy Veldman, and Jean-Christophe Maillot. Her performance in Cantata Choreographed by Mauro Bigonzetti was awarded an honourable mention in Pointe Magazine’s article titled Standouts in 2009.

After completing the teacher formation at L’École Supérieure de Ballet du Québec with an honourable mention she began teaching for the school in 2016. Today she continues to teach at the school and is a guest teacher for visiting dance companies.