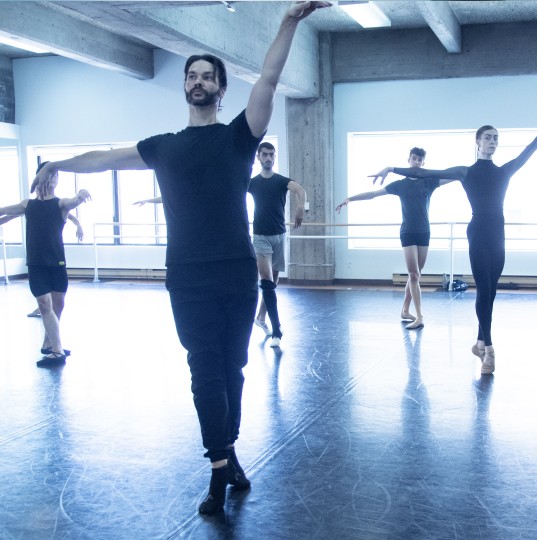 High-level guest professors joined our teaching team this summer to broaden the horizons of young dancers in the professional division. From the South African Ballet Theater to the Paris Opera to the Philippines, they have danced on the most famous stages of the world, performing the greatest classical roles and giving life to daring creations. Discover the exciting journeys of Beverley Bagg, Yvonne Cutaran, Patrick Lavoie, Delphine Moussin and Jean-Paul Schneider.

Beverley Bagg initially trained with the Royal Academy of Dance and the Cechetti Society in Johannesburg, South Africa. She went on to study at the Royal Ballet School in London, England before becoming, for 15 years, the principal dancer of the PACT ballet company (South Africa).

From the time she settled in Canada, she has been welcomed as a guest teacher by various dance companies and schools both here and in the United States, including the Ballet BC and Alberta Ballet. She also contributed to the presentation of ballets such as Swan Lake, Giselle, and Romeo and Juliet with the ** South African Ballet Theatre** and the Washington Ballet.

Born in the Philippines, Yvonne Cutaran started dancing with the Grands Ballets Canadiens at the age of 15, quickly moving up through the ranks to become principal dancer. In 1994, she joined the Boston Ballet, returning to the Montreal company the following year, before leaving again in 1998 to take part in the La La La Human Steps, a three-year international tour. She then danced with the Washington Ballet and Ballet BC.

As a guest artist, she has performed in Montréal, the United States, Cuba, Europe and her native country. Yvonne Cutaran teaches ballet at several schools and companies.

Patrick Lavoie trained at L’École supérieure and the San Francisco Ballet School. He joined the National Ballet of Canada in 1997 and was promoted to first soloist in 2003. His repertoire included, among others, lead roles in Romeo and Juliet, Swan Lake, Cinderella, Onegin and The Firebird. He also danced with the company at the Vancouver 2010 Cultural Olympiad.

Patrick Lavoie retired from the stage in 2015, but continues to work with the company as part of its team of health professionals. Following undergraduate studies in neuroscience and molecular genetics at the University of Toronto, he is now pursuing a master’s degree in physiotherapy at McMaster University.

Trained at the Paris Opera Ballet, Delphine Moussin joined the company at the age of 15, rising to star status in 2005. She held a number of roles in the company’s repertoire and worked under the direction of Maurice Béjart, John Neumeier, Jerome Robbins, William Forsythe, Pierre Lacotte, Rudolf Nureyev, and Twyla Tharp, performing in several of the latter’s ballets in New York and Japan.

Delphine Moussin has received a number of awards, including one from the Association pour le rayonnement de l’Opéra de Paris (Association for the outreach of the Paris Opera Ballet). She was invited to perform, among others, by the National Ballet of China as well as prestigious galas such as the one organized by the Cartier Foundation. Since 2011, she has taught at the Paris Opera Ballet as well as in Kyoto.

Jean-Paul Schneider studied dance with Nora Kiss, teacher at Maurice Béjart’s Twentieth Century Ballet company, and trained in theatre with Jean-Laurent Cochet in Paris. He was first dancer with the Grands Ballets Classiques de France, before assuming the musical direction and choreography of some twenty plays directed by Nicolas Bataille.

For a gala bringing together the dancers of the Paris Opera Ballet and the Royal Ballet in 2018, he created a solo for its star, Delphine Moussin, and took part, as a playwright, in the creation of Huis-Clos, a ballet inspired by the novel by Jean-Paul Sartre and performed by Delphine Moussin as well as Agnès Letestu and Rupert Pennefather. Since 1998, he has been leading workshops in Montréal for actors, dancers and singers collaborating with the Grands Ballets, among others.